Introduction of the Clarinet

Introduction of the Clarinet

The clarinet is a musical instrument of woodwind type. The name derives from adding the suffix -et to the Italian word clarino, as the first clarinets had a strident tone similar to that of a trumpet. The instrument has an approximately cylindrical bore, and uses a single reed.

Components of the clarinet

Reed: The reed is a thin strip of material mounted in the mouthpiece which when vibrated creates the clarinets sound. Clarinet reeds are usually made from cane, although other materials such a plastic do get used. The clarinet reeds vary in rigidity and will be chosen depending on the ability of the player, a beginner clarinetist is more likely to use a softer reed whereas an advance clarinetist will use a more rigid reed.

Mouthpieces: are generally made of hard rubber or plastic, although some inexpensive mouthpieces may be made of plastic. Other materials such as crystal/glass, wood, ivory, and metal have also been used.The clarinet mouthpiece houses the reed and it is here that the clarinets sound is created. The vibrations made in the mouthpiece are sent through the instrument.

Ligatures:The ligature holds the reed in place in the mouthpiece. Ligatures are often made out of metal and plated in nickel, silver or gold. Other ligature materials include wire, wire mesh, plastic, naugahyde, string, or leather. 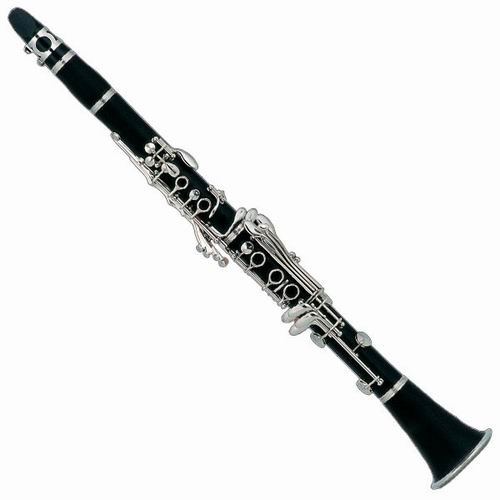 Lower joint :of clarinet is equipped with numerous tone holes of which seven (six front, one back) are covered with the fingertips, and the rest are opened or closed using a set of keys.The lower joint of the clarinet holds the keys for the right hand.

Bridge Key: The bridge key connects the key system from the upper joint to the lower joint.

Tone Holes: The tone holes are the holes in the body of the clarinet. The player can cover or uncover the tone holes to change the pitch.

Keys: The keys of the clarinet are used to cover and uncover the tone holes to change the pitch.

Bell Ring: The bell ring plays the same role as the barrel ring - it is there to stop pressure from the tenon and cork from splitting the bell. On some clarinets the bell rings has no function and is purely aesthetic.

Bell: Contrary to popular belief, the bell does not amplify the sound; rather, it improves the uniformity of the instrument's tone for the lowest notes in each register. the bell curves up and forward and is usually made of metal.The bell of the clarinet is the the flared section at the end of the instrument. The bell helps to project sound and improve the tone of lower notes.