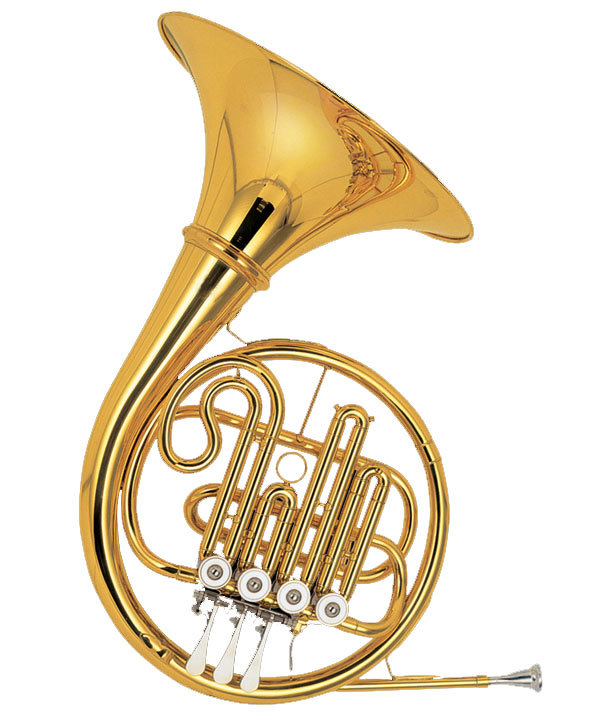 The french horn comes with mouthpiece, body as well as the mechanical part.The length of the F pitched type is 3.930m.The body is bent into a circular shape.The whole body has a number of bent parts, so the mechanical parts can adopt the rotary piston.As soon as the piston key is pressed down,the piston will rotate and the bypass pipe will be connected.Thus,the tube is extended.This product is commonly made with 3,4or 5 keys.It makes of brass and cupronickel.

After palying the french horn,the player should clean up the water inside.This can protect the product from corrosion because the slobber is acidic.If used frequently,then the product should be cleaned internally with the running water every half a month or a month.The water can be supplied from the mouthpiece or the bell mouth.The operator should activate the keys when cleaning the inside of the musical instrument so as to clean the key and piston.

The pitch pipe can be taken out and individually cleaned. Do not make the product and the tubes collided with other objects.When the cleaning work is done,the water inside the product should be cleaned out.It can be fully poured out by rotating the pipe up and down.Then, wipe clean the tuning pipe and coat it with vaseline lubricating oil.First,plug the single pipe into the french horn and rotate several times to make the oil completely contacted with the relevant parts.Then,insert the two pipes at the same time and rotate them a few times.

The water stain,oil stain and fingerprint on the surface of the musial instrument should be wiped out by use of clean cloth.Made of steel wire,the spring is subject to rust when contacting with water for a long period.To avoid such a problem,the spring should be dried up and applied with some white oil or sewing machine oil,after the musical instrument is washed.

If the key of the french horn has the iron screw, then the iron screw should be oiled for prevention of rust.The keys should be oiled regularly.There are two kinds of oil which should be added in different positions.One is the pure oil,namely the white oil or the sewing machine oil. One or two drops of pure oil should be given to the upper and lower shafts of the keys.The back cover can be opened to facilitate the oiling of the lower shaft.

The other kind of oil is the brass valve oil.First, pull out th whole pitch tube and supply several drops of oil to the piston via the tube with mouth placed upwards.The keys should be activated when the oil is supplied, thus the oil can perrmeate to the whole piston.As the oiling work is finished,the pitch pipe should be reinserted.

Particular attention should be rinsed frequently with the hair brush.At the ratary part of each key are two blocks of cork or rubber which are used to reduce the sound and to position the piston. The size of the cork is directly related to the flow of the air,tone quality and pitch.After being used be a long period,the cork will be exposed to aging and breakage.Then, it should be changed.The rubber will be melt when in contact with oil.In such a case,it should be change as well.The cork or rubber is changed with the rear cover opened in line with relevant scale.When the keys are pressed or released,the scale can be aligned.

There are many screws on the french horn which play different roles,including the one with large cap,the one on the key rod,the one on the key frame,the one on the spring, the one use for positioning the key,etc.These keys should be checked frequently to prevent them from loosening and missing.In this case,the musical instrument can be used normally.