It's been sitting on my shelf since November waiting for the right time to start, but now I'm excited about the 335 bass guitar kit.

It's an ESB-4 kit with a semi-hollow body, flame maple cap and maple back. (identical in most respects to the ES-1G/ES-1GT 6-string kit). The front of the body has 3-ply binding whilst the back has singe ply. Pretty standard for this style of hollow body electric guitar. It was on the basis of an enquiry from yours truly that Xuqiu decided to stock this particular kit. I've been trying to source such a kit for a while, and from Xuqiu came through for me. It's a testament to their truly amazing customer service.

Since it was the first of ts kind, the version that I received was the very first production run from the chinese factory. As such there were bound to be a few issues - and there are - but nothing that can't be handled with a little patience.  Firstly the neck pocket isn't really finished, and when positioned in the pocket, a sizable gap exists between the neck heel and the base of the pocket. Nothing a little filing won't fix. 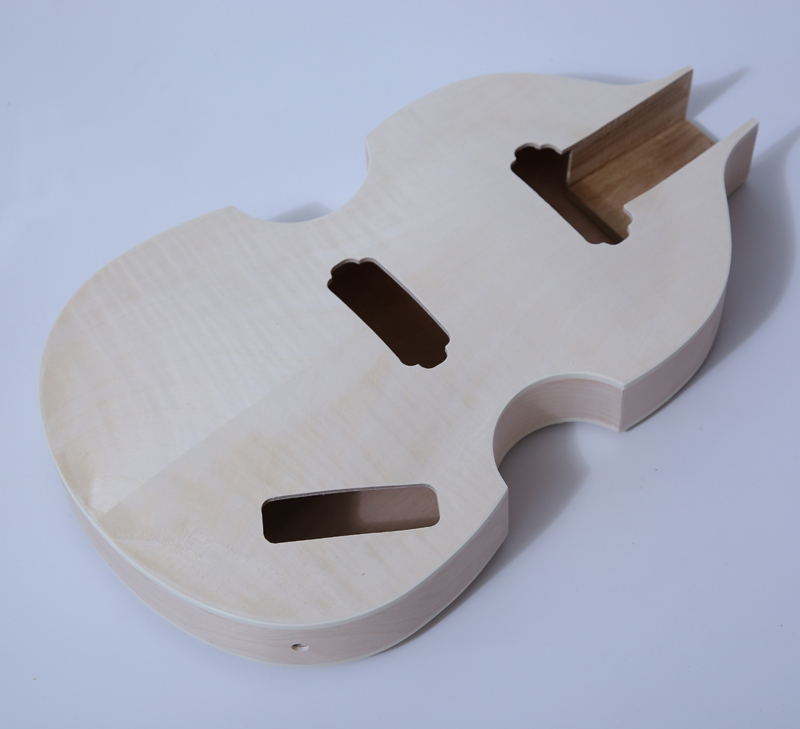 And in the end, that's all it took - a few minutes work with my bastard file to flatten the inside floor of the neck pocket and the neck fit was pretty well perfect. Come gluing time, there will be no issues there.

With the neck pocket fixed, the rest of the mock-up process went reasonably smoothly. The neck alignment was perfect right out of the box, with strings from the bridge sitting straight along the neck.

The second unfortunate teething issue with the kit concerns the fit of the tuning pegs in the headstock. Unfortunately the headstock has been made just a touch too small for the large tuners that were supplied (and which are a signature for this style instrument). With the reduced size headstock, the pegs touch in the middle and cannot sit straight.

There are two possible fixes to this problem: a) to grind a little of the shaft off each peg so that they can straight sit opposite each other, or b) to fill the current tuner holes with dowel and redrill new holes for smaller tuning pegs. I'm leaning towards option a) because it means no complicated woodworking to attempt. The tuning peg shafts won't look as nice this way, but if I don't take too much off no-one will be any the wiser.

So, I think I will see to the tuners before I do anything else, just to make sure the grinding actually solves the problem and the pegs can be screwed into their final position. After that's done the finishing can start! Should be a great build.