The woodwind instruments in this family all used to be made of wood, which gives them their name. Today, they are made of wood, metal, plastic or some combination. They are all basically narrow cylinders or pipes, with holes, an opening at the bottom end and a mouthpiece at the top. You play them by blowing air through the mouthpiece and opening or closing the holes with your fingers to change the pitch. Metal caps called keys cover the holes of most woodwind instruments.

The mouthpieces for some woodwinds, including the clarinet, oboe and bassoon, use a thin piece of wood called a reed, which vibrates when you blow across it. The clarinet uses a single reed made of one piece of wood, while the oboe and bassoon use a double reed made of two pieces joined together. Just as with the stringed instruments, the smaller woodwinds play higher pitches while the longer and larger instruments play the lower notes. The woodwind family of instruments includes, from the highest sounding instruments to the lowest, the piccolo, flute, oboe, clarinet, E-flat clarinet, bass clarinet, bassoon and contrabassoon.

A shorter version of the flute is called the piccolo instrument, which means small in Italian. At half the size of a standard flute, piccolos play the highest notes of all the woodwinds; in the orchestra one of the flute players will also play piccolo if that instrument is required. The high piping sound of the piccolo is also heard in traditional drum corps and marching band music. 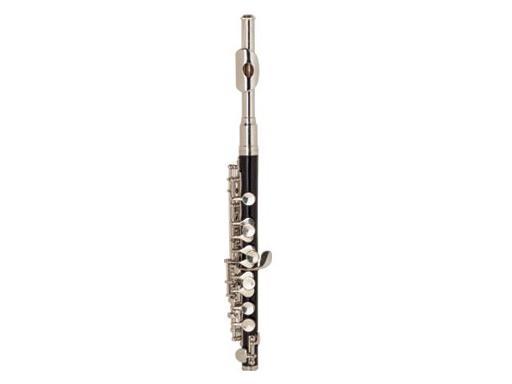 The flute is the oldest of all instruments that produce pitched sounds, and was originally made from wood, stone, clay or hollow reeds like bamboo. Modern flute musical instrument are made of silver, gold or platinum; there are generally 2 to 4 flutes in an orchestra. A standard flute is a little over 2 feet long and is often featured playing the melody. You play the flute by holding it sideways with both hands and blowing across a hole in the mouthpiece, much like blowing across the top of a bottle. Your fingers open and close the keys, which changes the pitch.

The oboe wind instrument is a 2 foot long black cylinder with metal keys covering its holes, and its mouthpiece uses a double reed, which vibrates when you blow through it. This vibration of the reed makes the air inside the oboe move, and thus creates sound. To play it, hold the oboe upright, blow through the double reed in your mouth, and use both hands to press down on the keys to open and close the holes and change the pitch. There are usually 2 to 4 oboes in an orchestra and they produce a wide range of pitches, from haunting sounds to warm, velvety smooth notes, which make the sound of the oboe very memorable. In addition to playing in the orchestra, the first oboist is also responsible for tuning the orchestra before each concert. Listen for the special note "A" that the oboe plays before the music begins.

The clarinet could easily be mistaken for an oboe, except for the mouthpiece, which uses a single reed. Clarinets come in a number of different sizes, and the standard B-flat clarinet is just over 2 feet long. Some musical works require the clarinetist to play several types of clarinet in the same piece. The 2 to 4 clarinets in the orchestra play both melodies and harmonies, and they have a dark rich sound in their lower notes, while the upper part of the clarinet's range is bright and resonant. You play the clarinet as you do an oboe, by holding it upright, blowing through the reed, and using your hands to change the pitches by opening and closing the keys with your fingers.

The smaller E-flat clarinet is just like a standard clarinet, but about half the length. Its shorter size allows it to play higher notes.

This is the grandfather of the clarinet family. The bass clarinet is so large that its top and bottom are bent to make it easier for musicians to hold and play. Its greater length allows it to play some of the lowest notes in the orchestra.

The bassoon instrument is a long pipe, doubled in half, made of wood, with many keys. The bend in the pipe makes it possible for musicians to play it comfortably. If it were straight, the bassoon would be around 9 feet long! Like the oboe, the bassoon uses a double reed, which is fitted into a curved metal mouthpiece. There are 2 to 4 bassoons in an orchestra and they have a similar range to that of the cello.